Anyone Can Represent Their Country and Compete Internationally

In Triathlon and Multisport, there’s a world championship for every age group.

Through a worldwide series of qualifying local races run by the national federations, recreational athletes can compete for the right to represent their country in their own age group.

Every year, various races across Canada are designated National Team Qualifiers. Some of these are Triathlon Ontario-Sanctioned races across the province. Athletes qualify by finishing high enough in their age group in a qualifying race.

Age-group athletes who qualify will be invited to join Triathlon Canada’s Age Group National Team. Being a part of the team at a World Championship is a great multisport experience many athletes train for years to achieve.

To start your Age-Group World Championship journey, read through the qualification information on this page, then check out this year’s qualifying races below. 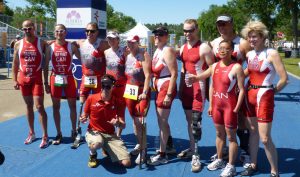 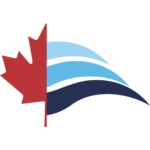 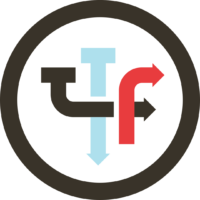 For more details about the World Triathlon Age Group Championships or criteria for being a part of the National Team, please contact Triathlon Canada at [email protected] or visit their website at www.triathloncanada.com.

In order to be selected for a national team, an athlete:

Ontario athletes interested in qualifying for a national team should:

What is a roll-down?

A roll-down is a method of allocating unclaimed qualifying spots based on race ranking.

There are many ways to roll down qualifying spots. In this case, Triathlon Canada has chosen a largely online, expression-of-interest based system.

Qualifying races receive a number of qualifying spots. A spot refers to one spot for each male and each female in each five-year, age-adjusted age group.

In races with two or more spots, the first and second, and perhaps the third, fourth, etc. place athlete qualifies.

Roll-down happens when some spots go unclaimed. Perhaps an athlete has already qualified at an earlier race, doesn’t want the spot, or there aren’t enough athletes in the age group.

In a roll down, unclaimed spots are offered to athletes in order of their placing. If the first place athlete doesn’t claim their spot, it will be offered to the second place athlete, then the third, and so on.

What is the minimum placing to qualify on roll-down?

Athletes placing lower than 8th in their age-adjusted age group will not qualify, regardless of roll-down spot availability.

What are age-adjusted results?

For qualifying purposes, results from qualifying races are adjusted into five-year age groups based on athlete age as of December 31 on the year of the championship.

How do age-adjusted results differ from race results?

Age-adjusted results will differ from race results because most races determine age groups based on athlete age as of December 31 on the year of the qualifying race – not the year of the championship, which is usually a year later.

How do I tell if I’ve qualified when results will be age-adjusted?

Athletes who qualify will receive an email notice of qualification from Triathlon Canada, within 30 days of their receiving the official age-adjusted results.

In practice, receiving a notice of Qualification may take up to 6 weeks after a qualifying race.

Short of knowing the birth dates of everyone in the race, it’s not possible to tell for certain if an individual athlete has qualified until a notice of qualification is received from Triathlon Canada.

How are results age-adjusted?

Triathlon Ontario does not make qualification decisions, will not provide age-adjusted results, and cannot confirm whether an athlete has qualified. Please do not contact TO for your qualification status.

Should I race again if I think I‘ve qualified, but haven’t received a notice of qualification?

In cases where an athlete isn’t 100% sure they’ve qualified, it may be advisable to enter another qualifying race in order to increase the chances of qualifying.

What is an EOI?

EOI stands for Expression Of Interest.

In this case, and EOI is an online registration of your interest in qualifying for the 2020 Age Group World Championships National Team.

The EOI will be done online through CCN, the same platform used for Triathlon Ontario membership and many race registrations.

In order to qualify you must register an EOI prior to racing a qualifying race.

Registering your EOI confirms your contact information, your membership in your provincial association, and your eligibility for a roll-down spot.

Do I need to register an EOI for each qualifying race?

You must register an EOI for each qualifying race at which you wish to qualify.

Is there a charge to register an EOI?

Triathlon Canada will charge a non-refundable $20 to register an EOI.

What if I place well enough to qualify, but didn’t register an EOI?

Athletes who fail to register an EOI (Expression Of Interest) prior to their qualifying race will not qualify at that race, regardless of finishing position.

Can I qualify at an out-of-province qualifying race?

Athletes who are members of their home provincial association may qualify an any qualifying race nationwide.

Will placings be adusted to remove out-of-province athletes?

Will placings be adjusted to remove out-of-country athletes?

Athletes who do not meet ITU nationality requirements to represent Canada at age group international competition are not eligible for the Canadian National Team and will be removed from the age-adjusted results.

This can substantially affect placings.